I have previously written about flame retardants and how the practice of incorporating brominated flame retardants (BFRs) into materials is used to improve public safety by slowing down, or retarding, the spread and growth of a fire, thus increasing the time it takes to reach flashover. Several national agencies set flammability requirements for plastic foam insulation and other building materials, as measures to help prevent loss of life and minimize physical damage. To meet these performance requirements, BFRs (and other types of flame retardant chemicals) are added to the material. While these BFRs have been found in the environment and in people, their use has always been defended based on the fact that they improve public safety and save lives. However, these improved public safety claims have recently come under fire.

The issue was first drawn to the public’s attention with the excellent investigative journalism series by the Chicago Tribune titled Playing With Fire. Below is the introductory video, but do yourself a favor and read the entire series. 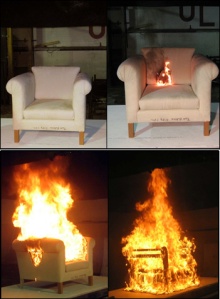 The fiery debate regarding the efficacy and necessity of the incorporation of flame retardant chemicals into furniture foams heats up, as claims by industry go up in smoke.

One of the findings presented in the series, was from a report by the Consumer Product Safety Commission (CPSC) which found that “fire-retardant foams did not offer a practically significantly greater level of open-flame safety than did the untreated foams (p.23).” The report further noted that a fire barrier (composed of fiberglass, modacrylic, and polyester) between the upholstery fabric and the foam provided a markedly increase in the overall fire safety of the furniture. A similar report by Underwriters Laboratories (UL) also reached the conclusion that barriers (often called interliners) offer significant fire-safety advantages, while flame retardants in foam do not. When called before the US Senate Committee on Environment & Public Works, Marshall Moore, spokesperson the flame retardant producing company Chemtura, defended his companies products noting “Scientific data show the relative risk associated with our flame retardants is extremely low and is far outweighed by the societal benefits of an innovation that reduces the number and severity of fires that can threaten lives and property.” This claim was disputed by scientists, and the lead author on the paper cited by Moore, in the Tribune series.

The above studies indicate that the incorporation of flame retardant chemicals furniture foam, has no significant effect on fire safety, and in fact, more improvements in fire safety are achieved with the use of design and technological interventions, such as barriers. While this holds true for upholstered furniture, there had been some questions as to whether this held true in other products for which flame retardants are added, such as building materials. Recently, a report found that flame retardants routinely added to foam insulation make no difference to the prevention of fire in buildings where a fire-safe thermal barrier already exists. As with the furniture case, the authors found that when a code-mandated thermal barrier was in place, the flame retardants (in this case HBCD and TDCPP) did not provide additional benefit to reducing fire hazard. They further comment that during fires, flame retardants are liberated and can actually make fires more deadly! It was recently found that halogenated flame retardants increased the amount of carbon monoxide and hydrogen cyanide released during combustion, increasing the acute toxicity of those exposed. As well, when products with BFRs incorporated into them burn at high temperatures, they can produce polybrominated dibenzo-p-dioxins and dibenzofurans, which have chronic health effects for those exposed, particularly fire fighters.

The few examples above prove that chemical intervention is not the only option for improving fire safety, and in fact it may not do much to improve it at all. Given that the role of flame retardants is to increase public safety, it is time that we took a serious look at whether they are causing more harm than good, and begin to retard their usage.